Cuba in business: how to make something out of nothing (P2)

(If you’ve missed Part 1 to our story on Cuba, you can read it here)

Officially, only selected Cuban citizens are allowed, by the invisible Revolutionary Government, to have internet access. Apart from the trusted ruling elite, that small privileged band includes certain elite professionals, like chosen journalists, who apparently need to know which particular news they must not broadcast.

For Cuban geeks and tech startups, this means that most of the time they must work offline writing very clean code, and then sprinting to upload it on a periodic basis. Cuban AirBnBs, Amazons, Ubers and Yelps are all developed with a fully functional offline mode so every Cuban can actually use them.

On the other hand, all of us, Western web-addicts, develop an instant web-deprivation, the moment we step on Cuban soil.  No internet! No emails! No Facebook! No updates! Our world literally stops.

The only way to get connected in Cuba is by using a one-hour WiFi scratch card sold by state owned telco ETECSA. The card costs 2 CUCs for one WiFi hour (about $3), and can be used only in one of the 35 WiFi parks installed by the government in 2015.

The card gives you an account number and PIN,  valid for 1 month and comes with 3 problems:

That allows for a nice little business opportunity for locals. Smart thinking Cubanos and Cubanitas line up early in the morning in front of ETECSAs, often dragging along elderly relatives, grannies and aunties. After a few hours of queuing up, each is allowed to buy one Wi-Fi card. Which, of course, they do not use but sell to tourists for 3 CUC a pop.

On the evening when I decided to finally let the family know that I was alive and not locked up in the Guantanamo Bay, the WiFi did not work on the ground of the WiFi park. The only option was to use it in a rooftop restaurant of the Obispo street hotel. Two mojitos and 6 emails later, the whole joy cost me 8 CUC – around $12. Worst of all, mojitos were quite ordinary. Now, that is definitely worthy a complaint! Must be.

Content from international media is fully blocked by Cuba’s government. With no internet, staying well-informed and updated is a real challenge in Cuba. Cubans rely on hacking and offline social networking to get their products and business off the ground.

Cuba has a universal and free education system, which trains doctors, engineers, scientists and of course IT professionals.  The average Cuban earns a ridiculously low wage of 25-35 CUCs per month (about $35-45).  Cuban developers earn more but still not enough to survive – under $500 per month.

Despite limited and slow Internet, some describe Cuba as the next India due to Cuba’s solid, affordable developer talent, naming IT outsourcing as one of Cuba’s most promising short term industries. Cuba graduates over 4,000 IT engineers a year. With limited state jobs to absorb this supply, as well as a really low monthly wage, many graduates start their own businesses, or select much better occupations like taxi driving.

Our taxi driver Roberto, whom we found through YoTeLlevo, local driver marketplace developed by our new friend Cuban geek  Martin Proenza, turned out to be an IT graduate.

Roberto, with his mother’s help, bought an old classic car and registered as a taxi driver. His monthly income today is about 1200 CUC, which  is about 40 times higher than income of most Cubans. Compare this to the income of the Head of the Gynecology Department – our AirBnB host in Trinidad – who earns 65 CUC ($80) per month, and you can easily see why population growth is at risk in Cuba.

With all the above said, Cubanos and Cubanitas should be forgiven for being miserable, pessimistic and defeated all the time, right? Except, they are not! For the most part, not in the slightest!

Depression? Anxiety? Gluten intolerance or IBS? G’mme a break. Sure, they occasionally whinge and moan, longing for better times and normal life, but for most part they are positive, cheerful and – happy! Their music is the happiest one around.

If you you want to experience everything Cuba has to offer, and go off the grid for a while, get in touch with Martin first. You will need a friendly driver to pick you up from the airport, usher you past all the money exchange 2-hour queues and deliver you to your Casa on a promise to be paid later!

You can find Martin on ZippyCrowd, on YoTeeLevo and anywhere else Cuban geeks congregate offline! Have a mojito on us!

Get jobs done with ZippyCrowd

Loved the story? Stay tuned – we have more great reads every week.

Have cool skills? Great ideas? Know someone awesome?  Get in touch and get involved!

And please don’t leave without hitting  ❤ button below and spreading some love on social! 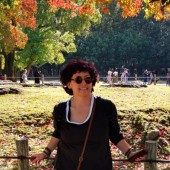 Stuck in the wrong career? Your world is your… croissant!

Finally the only word-of-mouth that works for you!

Get connected to the people you need, through recommendations from people you trust.

Welcome to ZippyCrowd! It's really great to have you join the crowd, and congratulations on making the first step towards raising your profile and getting recognized.

Stay in the know. No SPAM. Ever.